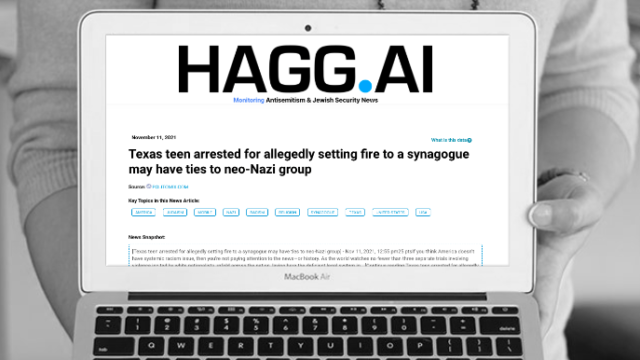 New York, New York, November 16, 2021 /Xinwengao.com/ - Hagg.ai is an empowering monitoring platform that showcases how thousands of online sources and social media around the world report on antisemitism and Jewish diaspora security by delivering curated data, intelligence, information, and insights culled and organized by A.I. technology. Hagg.ai’s media intelligence pinpoints how and where news arises so netizens can understand the range of antisemitism and Jewish security news from around the globe.

Around the world, “antisemitic, xenophobic, and hateful messages and conspiracy theories are proliferating rapidly online,” according to the Anti-Defamation League, especially in relation to conspiracies related to coronavirus. And 63% of surveyed Jews have had personal experiences with antisemitism and hate in the United States over the past five years, according to the 2021 Survey on Jewish Americans’ Experiences with Antisemitism. Likewise, in Europe, violent online rhetoric has been coupled with antisemitic offline physical attacks in recent years, and the European Union has responded with the Council Declaration on the fight against antisemitism.

“Hagg.ai solves the Jewish Diaspora’s current challenge of relying on a mishmash of reporting and alerting methods for understanding both ongoing Jewish security news and pending crises,” says Daniel Levinson, founder of Hagg.ai. “Hagg.ai is empowering. It’s the immediately usable platform that brings together all the critical Antisemitism and Jewish security information online, anywhere and anytime.”

Computer algorithms generally select what is shown on Hagg.ai from thousands of online sources, and the algorithms determine which stories, images, and videos show, and in what order. Individual news stories are copyright their respective sources on Hagg.ai, and Hagg.ai organizes the data based on Natural Language Processing techniques. Future iterations of Hagg.ai will introduce non-English-language source data translated and organized into English. Levinson has been working in the OSINT, artificial intelligence, and media intelligence world for over 20 years, primarily in Asia, where he has founded, built, and sold multiple data intelligence companies that supplied critical business and risk intelligence to government, corporate, and organizational clients.

From where does the name Hagg.ai originate? Haggai was one of the twelve minor prophets in the Tanakh, or Hebrew Bible, during the building of the Second Temple in Jerusalem. Most importantly, he is known for two important things: he is the author of the eponymous Book of Haggai; and in 520 BCE he had his prophecy where he commanded the Jews to rebuild the Temple.

While the daily briefs on Hagg.ai are continuously free for all subscribers, the platform is funded by donations and by advertising both inside the daily email alerts and on the Hagg.ai website. Netizens can also visit Hagg.ai via social media on Twitter at https://twitter.com/hagg_ai or LinkedIn at https://www.linkedin.com/company/haggai/