While cellphone networks have managed to cover large swaths of the six most-populated continents, making a call from Antarctica isn’t so easy. 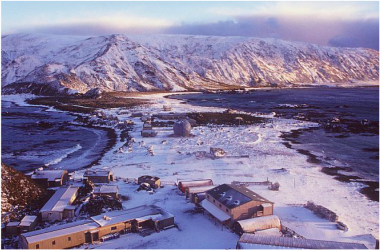 Now, though, researchers in parts of Antarctica have a mobile communication option that goes beyond pricey satellite phones. A new system from Range Networks allows researchers to use ordinary cellphones to connect with one another, and even to the rest of the world, thanks to a satellite connection located at the base station.

The system replaces what essentially were walkie-talkies that were used by researchers when away from their desks. And, unlike a satellite-only approach, the Range Networks system keeps the researchers connected to one another, regardless of whether there is a satellite signal.

“If there is any loss of connectivity to the outside world, the group can still talk to one another,” said Jacob Winkler, who heads sales and business development for Range Networks.

The system, which can handle 400 mobile phones (along with 800 desktop-based IP phones), is also designed to handle data traffic from various sensors.

While Antarctica presents some unique challenges, Range Networks is using basically the same approach it has gone with to connect other remote corners of the globe, including Oaxaca, Mexico; Papua, Indonesia; and parts of southern Zambia. Among the hallmarks of the Range Networks approach is its use of off-the-shelf GSM cellphones and the open-source software known as OpenBTS that runs on its base stations.

The Antarctic project began roughly a year ago on Macquarie Island, with plans now in place to expand to the Antarctic mainland as well as to those aboard a steel-hulled research vessel.